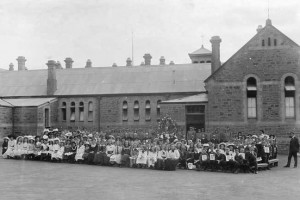 View taken in the yard at the back of Kapunda Primary School, with the children posing for the photographer. A number of teachers are also included. It appears to be a special occasion – there is a large wreath, a number of boys in uniform (two holding rifles), several of the children are holding posters, and all appear to be wearing their Sunday best.
Date c.1900

Kapunda Public School The TEACHERS will be in ATTENDANCE at the SCHOOL on FRIDAY the 18th just for the purpose of ENROLLING intending PUPILS. Each child should be furnished with a slip of paper with his or her name and age (years and months) written on it.”

It is believed there were approximately 450 children of school going age in Kapunda at the time and one can assume that most or all of these attended in the first years of the school. Records available show that ten years later in 1878 the enrolment had reached 550.

The one common element between 1878 and today is the heritage listed stone building on our site that currently houses our library resource centre, computer suite, activities room and Out of School Hours Care facilities.

We still have a number of parents who, when enrolling their child at school for the first time, reminisce about their classroom “in the old building”.

Today Kapunda Primary School enrolment sits between 300 and 330 annually, after having reached a recent times peak of 400 in 1997.